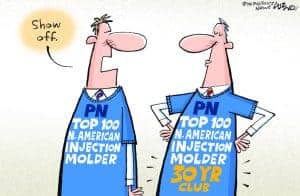 Must be summer because it is time to look at the numbers behind Plastics News' ranking of the Top 100 North American injection molders. Look to next week's issue for the smaller firms.

There are 102 firms in the top 100 this year, that's due to the three ties at No. 100. The companies have combined molding sales of $29.1 billion. The top 10 alone make up 34 percent of that total revenue. The average sales per firm is $284.7 million, holding steady compared with last year.

The general trend in automotive was down, although a few lucky firms managed to grow. Medical molders also grew. I read many annual reports where company executives explained that their sales increases were due to resin pricing pass-through to customers.

For those firms reporting growth at the top 100, the average increase was 15 percent. The figure rises to 23 percent if you include acquisition-related growth. Six percent of the top 100 executives in this list are women.

Did you know this marks our 30th year publishing this ranking? I took a look at the top firms in our first few years. Some are missing because in the early years we ranked only custom injection molders, but eventually we expanded the universe to include captive and proprietary molders, too.