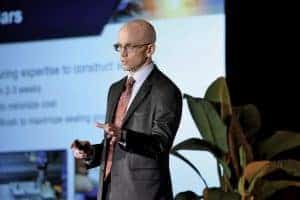 Naples, Fla. — Companies involved in a project — molder, machinery supplier and component supplier — are linked together. But when things go wrong, "the blame game" can undermine that partnership, Alex Hoffer said at the Plastics News Executive Forum.

"First, you can only control you," Hoffer made clear. "And second of all, you've got to remember that you're all interconnected.

"We rely on each other. Let's work together so that we can get to that destination," said Hoffer, vice president of sales and operations at Hoffer Plastics Corp. in South Elgin, Ill.

Hoffer told the story of a contract packer that filled applesauce into pouches, a new-product development project. It used Hoffer Plastics' Trust-T-Lok closure, an injection molded cap that is tamper-evident. The product was ​ filled on a horizontal form, fill and seal machine.

But the co-packer reported that 20 percent of its packages were "leakers" — not acceptable. It looked like either the spouts were not aligned correctly or the pouch film was bad, Hoffer said.

First, Hoffer said, the entire team got together. He said he thought this would resolve the problem, but "unfortunately, we started blaming each other."

That got him thinking about the issue of blaming others, "this human tendency that we find an external reason for what may be an internal problem — maybe."

He said the blame game is also now is part of our culture.