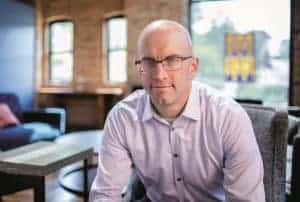 Founded in 1953 by Robert and Helen Hoffer, Hoffer Plastics Corp. is a custom injection molder that serves customers in the packaging, automotive, appliance and consumer industrial industries. Hoffer Plastics was named the Plastics News Processor of the Year in 2012.

Alex Hoffer's first job at Hoffer Plastics was to clean the air conditioners on top of the 365,000-square-foot facility in South Elgin, Ill.

"It was hot, boring, and I never wanted to work in the plastics industry after that summer," said the vice president of business development and operations.

After testing the waters in other fields, Hoffer eventually came back to the family business. He worked as an estimator, sales associate, business development manager, sales manager of packaging and director of packaging before landing his current title.

Hoffer graduated from Purdue University in West Lafayette, Ind., with a bachelor's degree in liberal arts and completed graduate work in education from DePaul University in Chicago.

He was nominated for Rising Stars by Hoffer Plastics Executive Vice President Jack Shedd. Hoffer, 36, just missed the age cutoff, but Plastics News made an exception due to his industry passion and career achievements.